The Top 10 Breweries in Atlanta 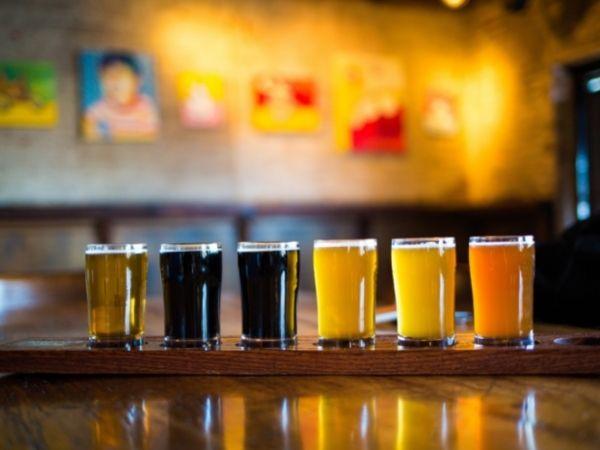 Drinking local beer is easier than it’s ever been in Atlanta than it is new.

The craft brewery scene in Atlanta has exploded in recent years, making Atlanta one of the best cities in the country for beer enthusiasts.

From Glover Park Brewery to Three Taverns Brewery, the Atlanta beer scene is marked by creativity, community, and camaraderie.

In the article below, we will talk about 10 of our favorite breweries in Atlanta.

Glover Park Brewery is located right off the historic town square in Marietta in a building dating back to the 1930s.

Glover Park is owned by Sam Rambo and Hank Dupre, both natives of Marietta.

Their brewery includes a tasting room, a patio with a fireplace, a kitchen, and a beer garden.

While you’re there, you should try the basic Base Camp lager, the McNerney’s Irish nitro stout, or the piney Off The Tracks West Coast IPA.

Glover Park also has seltzers made with blueberry puree, Georgia peaches, and more.

They also offer cocktails, and if you keep an eye on their calendar, you can visit them while they have a food truck out front.

Monday Night Brewing has locations in West End and West Midtown and has established solid roots in the Atlanta beer scene.

Monday Night Brewing has an excellent selection of year-round beers as well as a few seasonal stunners.

Our favorite is the Black Tie series, but they have many other limited releases you can’t go wrong with.

The Black Tie Series includes Fistful of Cake: Double Fudge Chocolate and Don’t Call It Hotlanta, and can be found on tap at select times throughout the year.

Halfway Cooks Beer stands out by not trying too hard.

Their tallboy cans sport labels printed like old-school paper printouts, and their Belgian-style lagers and ales are remarkably drinkable.

Halfway Crooks has also gained a devoted following after opening only a summer ago.

Everyone has been on a bit of a lager and seltzer kick for a year or two, but Halfway Crooks American and Belgian pale ales, German and Italian pilsners, and other specialties prove that you don’t need a head-knocking high-ABV beer.

Their Sanguine Belgian pale ale and the Decimals kellerbier are also so simple that it’s impressive.

The Atlanta Brewing Company has been around since 1993 and lays claim to being the oldest brewery in Atlanta.

No matter what you call it, inside you’ll find artisanal-quality beers in a souvenir glass that has become a must-have souvenir for your brewery road trip.

SweetWater is home to perhaps the most recognizable Atlanta Beer.

SweetWaters founders brought their Colorado beer training to Georgia in 1996.

Their current location takes up 25,000 square feet near the Ansley Park neighborhood.

During Brewery tours and tastings, guests can sample some of their most popular year-round beers and select seasonal rotations.

Locals love SweetWaters 420 extra pale ale, but they really do have something for everyone, including the blueberry-flavored SweetWater Blue and their Take Two Pils pilsner.

It took the place of Snow Tire Co. in Athens in 2014 and has been popular with students and visitors to Athens since.

Try out the Bibo, Reclaimed Rye, or Athens for their year-round selection when you stop by.

You should also give some of their new brews and seasonal beers a try that are always listed on their website.

Reformation Brewery was formed in Woodstock in 2014, and this European-influenced brewery is named for the Protestant reform movement.

The co-founder of this brewery is an evangelical pastor who is obviously pretty tolerant of alcohol consumption.

The fans of Reformation love their year-round beers, like Stark toasted porter and Jude tripel.

They have locations in Canton and a new specialty production taproom and beer garden in Smyrna.

And if you’re a fan of BBQ, they have Grand Champion BBQ right next door.

Down Home Brewing doesn’t have a physical location at the time of this writing, but getting your hands on their selection of brews is an easy and worthwhile feat.

Down Home places special emphasis on family. They are one of a few breweries that can add the title of history makers to their list of accomplishments.

When they launched in 2017, Down Home Brewing became the first black-owned and operated craft beer company.

In addition to finding them in select restaurants in the metro Atlanta area, you can find Down home in local liquor stores, bottle shops, and several Target retail stores.

The simplicity of the Game Night IPA is what won us over.

Or maybe it was the Nintendo NES controller that is designed into the can art.

Either way, similar to its fellow newcomer La Fria Caribbean lager, it’s a highly versatile beer that will set you up to try some punchier, two-hopped hazy IPAs via the New Contender series.

The New Contender Series is currently in its third round and pits Lemondrop hops against an Idaho “Stone Fruit” 7.

Three Taverns Brewery is nestled in Decatur, and they brew beers infused with Belgian tradition and New South innovation.

When he was on a European road trip in 1994, founder Brian Purcell was inspired by the brewing techniques of Belgian Trappist oinks.

When he acquired Belgian Brewmaster Jordan Van Ginderachter, his vision was underway.

Three Taverns looks to “surpass the ordinary” in their techniques and flavors. They have consistently put forth excellent beers in their New Belgian and Non-Orthodox beer collections.

Atlanta’s local favorites include the A Night in Brussels IPA, A Night on Ponce IPA, and Feest Noel, the holiday quadruple ale.

Stop by the Three Taverns tasting parlor to try their Sour Asylum series with the colorful Raspberry Sour Asylum Rhapsody in Red, only on draft.

Whether you want to visit one or two of these breweries, or all 10, Premier Private Rides is here to help.

Reserve one of our immaculate luxury vehicles and open the door for reservations for wine and beer lovers like you.

When you’re ready to visit Atlanta’s best breweries, you’ll be picked up and driven to the breweries of your choice in the Atlanta area and surrounding cities.

The best benefit to reserving a ride service is that you don’t have to be concerned about how much beer you taste throughout the day because you’ll be chauffeured safely from location to location.

If you need luxurious brewery limo service, Premier Private Rides is for you!

Live a life of luxury with our exclusive limo transportation services in the Metro Atlanta area.